Croatian Go Association (HIGOU) is performing a go project in several schools in different cities of Croatia. The project name is “Go – the game that teaches us to think”. The partners are two primary schools (Zagreb and Lipovljani), two secondary schools (Zagreb and Kutina), one special education center (Velika Gorica), one kindergarten (Zagreb) and the City of Kutina. The project is financed for one school year (ending in August 2017) by Croatian Ministry of Science and Education and co-financed by the City of Kutina. We appreciate the kind support of Nihon ki-in and the Embassy of Japan to Croatia very much.

The goal of the project is to establish the game of go as an educational tool which is well-connected with other subjects on various school levels, having the common goal of developing logical thinking and decision making skills in children and youth. The project allowed the purchase of go equipment and books, even clocks for tournaments. With kind support of Nihon ki-in, we got additional teaching materials and demonstration boards (sized 7×7) and even a visit of a distinguished professional player and teacher Catalin Taranu (5p), who visited Croatia during the First Croatian Go Week (May 8-14, 2017).

The First Croatian Go Week was a memorable set of events comprising public lectures, exposure of go to the media, ending with an international tournament (May 13-14) at a nice venue (public school) in Zagreb. The project has already produced immensely positive impact on go developments in Croatia: the number of people (children, teachers, parents) learning the rules of go exploded, the number of double-digit-kyu players competing in EGF-rated tournaments increased rapidly, and the number of members of Croatian Go Association is on its historical peak now.

The purpose of this report is to describe the First Croatian Go Week in detail.

Catalin Taranu arrived on Sunday, May 7, 2017 in the evening.

Mr. Taranu held the public lecture in a large “music hall” of the XVth Gymnasium in Zagreb. The XVth Gymnasium is by far the most successful secondary school in Croatia, who has many winners of medals on world competitions in math, science and informatics. More than 80 students and teachers attended the lecture “AlphaGo – Artificial Intelligence and the Game of Go”. The lecture was opened by school principal and visited by representatives of City of Zagreb and Embassy of Japan to Croatia. The lecture gave the new insight about the metaphors which make understanding of the game for absolute beginners very easy. Many students participated in the interactive exercises. After the lecture, Mr. Taranu played a simultaneous game with four students of the school who learned the game in 2016, already competing in serious tournaments. An additional lecture on Opening Theory of Mr. Taranu has been announced for Wednesday.

In the morning, Mr. Taranu visited the kindergarten „Kustosija” in Zagreb, where two groups of pre-school age are practicing go for several months. The exhibition of children art with go-motifs is showing their impression of the game of go. We used the small-sized boards donated by Nihon Ki-in to play capturing game with children aged 6 to 7. One kid is already playing on large board having strength of 10 kyu. 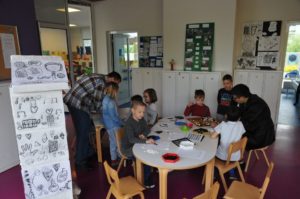 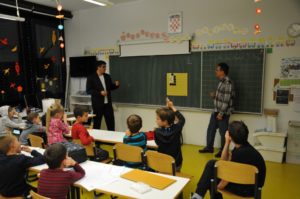 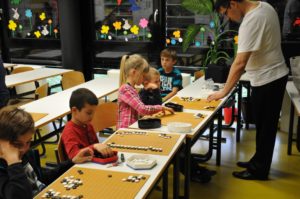 In the afternoon, Mr. Taranu gave two 45-minutes lecture about the game of go to beginners in 4th class (10-11 yrs old children) and in 7th class (13-14 yrs) in the primary school Alojzija Stepinca. At 6:30 PM, a 45-minutes lecture on “Essential Corner Tsumego” was held to a group of advanced beginners who study the game of go for almost two years. The lecture was attended by parents, too. After the lecture, Mr. Taranu played a simultaneous game with four students aged 8 to 11.

In the morning, Mr. Taranu gave a 90-minutes lecture on Opening Theory at XVth Gymnasium to a group of advanced beginners (one student is playing go for 4 years and has the rank of 4kyu).

In the afternoon, Mr. Taranu gave a three-hours lecture on games of AlphaGo at the Faculty of Geodesy, University of Zagreb. Ten Croatian go players attended including two strongest young players (2d and 3d) and Zoran Mutabzija, who was the European champion 50 years ago!

We travelled with Mr. Taranu to Lipovljani, a small town with 4.000 inhabitants, 100 km from Zagreb. Lipovljani is an important go-town, organizing the activity in local school and library for three years alread. There were more 60 children and teachers in the local school attending the morning lesson about the game of go. Then, we travelled to near City of Kutina, a little larger town with 14.000 inhabitants. Major of Kutina gave a reception and local media collected the statements and pictures. During last couple of years Kutina is the host of the most important “Tournament of Six” which determines the challenger for the Croatian Champion. After reception, Mr. Taranu gave a lecture on the Opening Theory to several double-digit-kyu players in the secondary school and played a simultaneous game with two players. 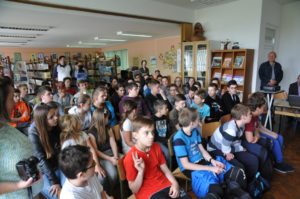 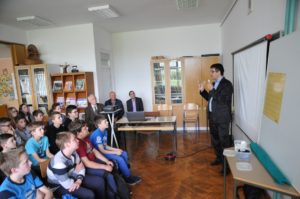 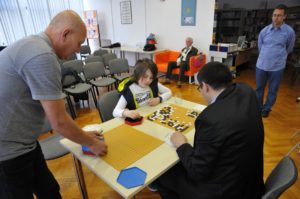 After visiting all project partner institutions during first four days, Mr. Taranu helped stronger players in the analysis of some recently played games, and played a courtesy game with Zoran Mutabzija, former European Champion. We discussed the ways of teaching go to beginners and organizational issues a lot.

The first day of Croatian Open Go Championship started smoothly in the local elementary school. At 1 PM, we had a short reception by the principal of the school, attended by a lot of school teachers and participants of the Championship. For the first time, players from five different tournaments, altogether 32 players played in the tournament. Mr. Taranu helped players with analysis of games they just played. The Championship included many additional activities like Go Workshop for Beginners and even PairGo “Parent and Child”. 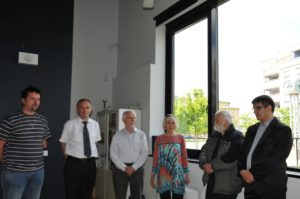 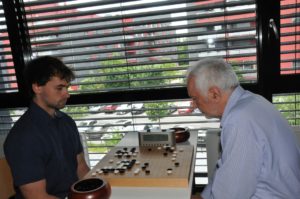 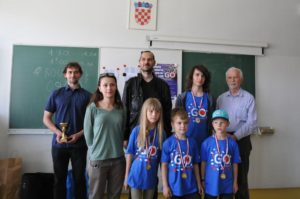 Mr. Taranu had to catch his flight back to Romania at noon.

SUMMARY: The visit of Mr. Catalin Taranu, 5p, had a tremendous effect on the development of go activities in Croatia. We learned a lot about the proper way of teaching beginners of all ages, a lot of new metaphors which make the first contact with the game more interesting. We discussed many issues related to organizing lectures and training for stronger players, and the organization of go association in general. Mr. Taranu helped a lot in raising visibility of the go project at the level of school principals and city authorities. At least 400 children, parents and teachers had the opportunity to attend the lectures and found the game of go the most exciting of all mind games. We used the equipment generously donated by Nihon Ki-in a lot. Now, many teachers and promotors of the game of go in schools can read the excellent book for instructors by Nihon Ki-in, which is really great source of all necessary information about the benefits, rules, history other facts about the game of go. By the end of the week, we finally got the message of support from the European Go Federation, and we are preparing a short report for the website of EGF.

Latest posts by dmedak (see all) 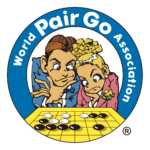